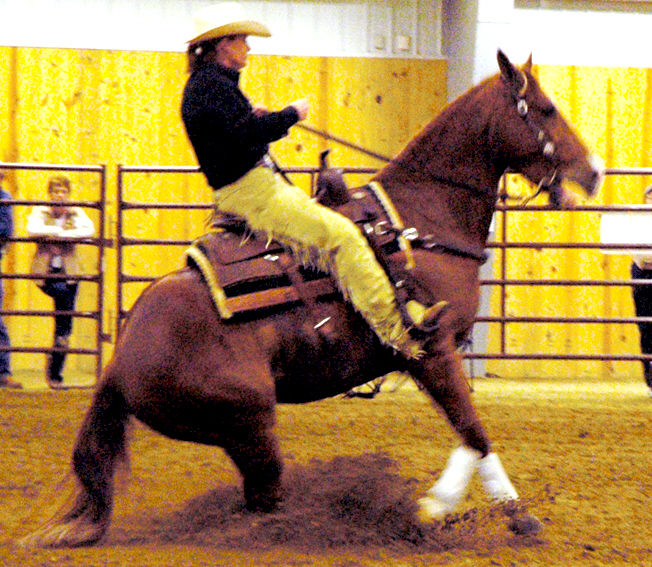 The act of moving the hips over for a one-rein emergency halt is the single greatest
technique you can employ to stop a horse that is bolting or bucking. It can and has
saved many riders from terrible accident and injury. Picking up on both reins when
a horse is out of control, does not help. Pulling on both reins captures the horse’s
energy and actually fuels the horse’s desire to flee. The horse will feel trapped and
will rear, buck or bolt. By picking up on one rein to have the horse move the hips
over, you actually deplete the energy and give the horse some place to go. The
movement becomes a constructive exercise. I spend a lot of time teaching horses the one-rein stop. I used to teach the horses to
move the hind quarters over when I picked up on the inside rein. I made sure the
horse disengaged and was giving to the bit. I also made sure that the horse was
stepping over and moving the hip by putting his left hind in front of his right hind.
Then I would wait for the hindquarters to stop. A few years ago, I changed my
approach. I’m always trying to train my horse for the future. In other words, I use
training building blocks to increase the horse’s skills. I train to something that I am
going to need later as the horse progresses in his training. Now, I do not wait for the
hindquarters to stop, I keep moving the hindquarters until the horse is soft and
giving. The reason I changed is that I don’t want to totally shut down the forward
movement. Later when I want to teach the horse to do a traditional turn on the
forehand I don’t want the horse to stop. With this approach, I no longer have to
work against the fact that I already trained the horse to stop when I asked for the
hips to move over.

There are three spots on the side of a horse. The first spot is at the cinch and
pressure there tells the horse to move the shoulder over. The second spot is an inch
or two back and tells the horse to move the shoulder and the hindquarters. This spot
is used for leg yields and side passes. The third spot is an inch or two further back
and it is for controlling the hindquarters. When teaching the one-rein stop, I put my
leg on the number three spot first and that becomes a pre-cue. In other words, when
I put my let on the number three spot that tells the horse that I want him to move
his hindquarters. Then I pick up on the rein and ask the horse to move the
hindquarters. This way, if I stay consistent, soon when I put my leg on the horse in
the number three spot he will move his hips over without me making contact with
the rein. The ultimate goal is to not have to make contact on the rein. The horse will
move his hips over in response to the pre-cue from your leg. The horse learns what
is next and responds accordingly to avoid the pressure. This pre-cue works well
when I want to teach a horse to pick up a correct lead or to do a lead change. It is
also necessary for teaching a horse to side pass.

If your horse connects the dots and figures out that what you want is for him to stop,
you can soften for just a moment. In other words, put your aids in neutral for a
moment. This actually tells the horse “good job.” Then continue and move the hips
over. When I put a leg on a horse, I want that horse to continue moving until I tell
him to stop. We can also tell the horse, in a short message, using a very short pause, “good job” and I also need you to continue to move your hips over. That way you follow through and your horse moves his hips over. Later you can use that same cue and by adding the outside rein the horse will do a very traditional turn on the
forehand.

I recommend practicing this movement at a walk and trot, in preparation for one
day when it could help you stay safe. 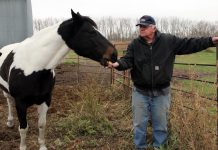 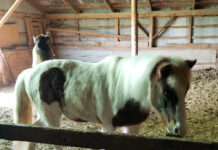