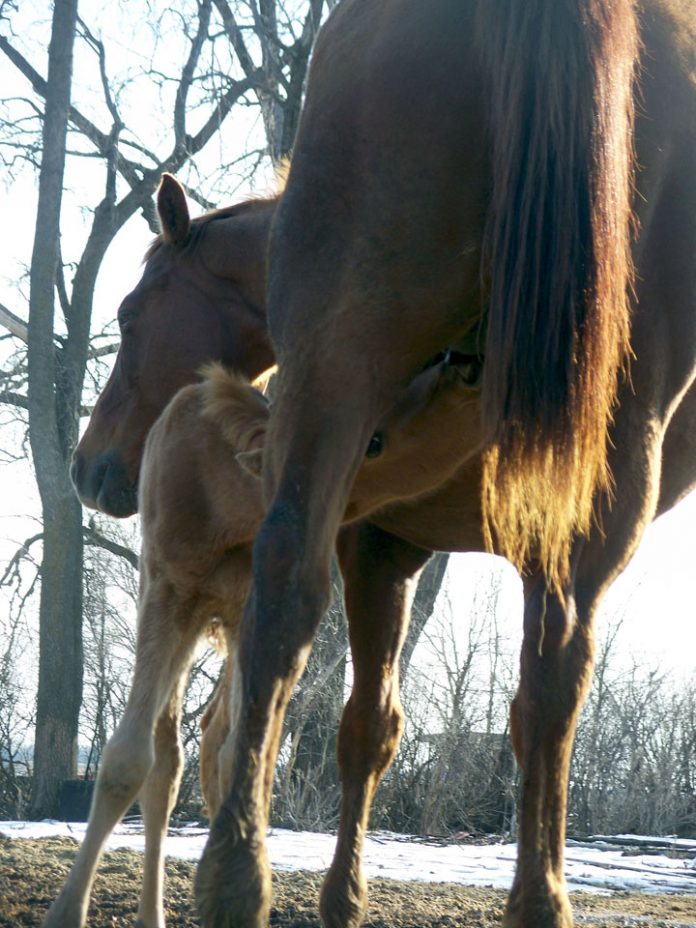 Colostrum – you know it as the mare’s first milk. It is a complex fluid, rich in nutrients and immune-regulating compounds, all designed to give the newborn foal the immune support he needs to thrive. Unlike humans, who are born with an initial level of immunity, newborn horses do not benefit from any placental transfer of immunoglobulins; therefore they must consume colostrum in the first few hours of life in order to survive.

It is fascinating to note that animal species can be divided into three classes based on the way immunoglobulins are transferred to newborns: (1) via placental transfer to the fetus before birth (primates, including humans, rabbits, and guinea pigs); (2) through both placental transfer and through mammary gland secretion of colostrum (rats, mice, cats, and dogs); (3) strictly from mammary secretions (ungulates such as horses, pigs, cows, sheep, and goats). Though human babies absorb only a very small amount of immunoglobulins from the small intestine, the presence of immunoglobulins throughout the gastrointestinal tract will bind bacteria, toxins, and other macromolecules, inhibiting their ability to be absorbed into the blood stream, thereby improving the immune response.

But does colostrum benefit adult horses?

I was skeptical at first. After all, immunoglobulins found in colostrum are very large proteins, far too large to be absorbed directly into the bloodstream at an advanced age. Even newborn foals are best able to absorb these macromolecules only within the first 6 to 8 hours of life. After that, the intestinal cells gradually stop absorbing immunoglobulins – a process known as “closure.” I reasoned that in adult animals, these proteins must be digested, starting in the stomach and later in the small intestine, resulting in pieces of the original – certainly not the entire immunoglobulin. Well, it turns out that I was only partially correct.

You see, while most of the proteins do end up being degraded by digestive enzymes, researchers at the University of Illinois at Urbana-Champaign, Aarhus University in Denmark, and the University of Calgary, Alberta, Canada, revealed that some portion of these large molecules is actually transported across the intestinal lining intact, remaining capable of binding to an antigen. That means supplementing colostrum to adults actually does have an impact on health. Furthermore, colostrum contains more than just immunoglobulins. It protects overall wellbeing by providing a wide range of factors including lactoferrin, oligosaccharides, peptides, leukocytes, and growth factors.

Bovine colostrum is the best choice

Colostrum from cows is richer in immunoglobulins than from other animal species, thereby offering improved protection against viral and bacterial infections. It is also very low in lactose, making it appropriate for adult horses (who are naturally lactose intolerant). Finally, bovine colostrum is readily available and easy to obtain.

Colostrum can have a remarkable impact on your horse’s health

Thousands of studies, using humans and animals, have revealed the many benefits of this extraordinary food. Colostrum from cows has been used to treat a vast variety of conditions including rheumatoid arthritis and respiratory allergies in humans, as well as to prevent and treat infections within the gastrointestinal tract. Though not directly related to horses, a fascinating study out of Africa recently revealed that children suffering from HIV infection actually started to gain weight, were not as fatigued, and showed significantly improved immune capacity.

Imagine what impact it can have for your horses. Studies using only horses are few; however, it is quite reasonable to extrapolate results from other studies to equine health. In 2002, researchers from the University of Manitoba, Canada, published a review of bovine colostrum’s benefits. Therapeutic applications of bovine colostrum supplementation include: immune-related episodes (such as allergies and autoimmune diseases), muscle and cartilage repair, wound healing, and gastrointestinal therapy. Other researchers have identified improvements in disorders such as obesity, insulin resistance, leaky gut syndrome, and ulcers. It falls nothing short of amazing.

Colostrum is a superfood worth feeding to your horse

All horses, even healthy ones, can benefit from this nutritious food. Bovine colostrum is safe to feed and may prevent health issues down the road. As a superfood, it is a natural source of nutritive factors that have a significant impact of on your horse’s recovery from a vast variety of ailments:

Allergies. Immunoglobulins and lactoferrin are known to promote and balance natural immunity. In addition, when there is an improper response to normally harmless substances, the proline-rich polypeptide present in colostrum actually reduces the pain, inflammation and swelling known to occur during allergies and autoimmune diseases.

Digestive distress. The gastrointestinal tract contributes the majority of the horse’s immune response because it is the first line of defense for protecting the horse from invading microorganisms, allergens and endotoxins. Any compromise to this system puts your horse at risk of developing ulcers, colic, diarrhea, and even laminitis. Bovine colostrum is not only protective but it also has the ability to heal conditions that include:

Obesity. Colostrum has been shown to help burn body fat. Researchers have revealed that Insulin Growth Factor (IGF-1) is the only natural hormone capable of promoting muscle growth by itself. This has an impact on obesity for two reasons. First, increased muscle mass improves the basal metabolic rate. And secondly, IGF-1 shifts fuel from carbohydrates to fat, meaning that the body will burn more body fat to provide energy.

Insulin resistance. Here is a fascinating find! Bovine colostrum supplementation has been shown to facilitate the movement of glucose into muscle, thereby reducing blood glucose, as well as triglycerides. In other words, colostrum can positively impact the negative consequences of insulin resistance. This has recently been studied in human patients with Type 2 diabetes, and it is reasonable to adapt this information to horses suffering from insulin resistance and resulting fat deposition.

Muscles, joints and ligaments. Insulin-like Growth Factors (IGF) promote optimum muscle growth during exercise. Researchers have found that human athletes who consume bovine colostrum daily show remarkable improvements in stamina and improved muscle mass. This is good news, not only for athletes, but for aging horses who may be becoming more frail.

Colostrum should be considered for any horse who is suffering from joint and ligament damage. Its IGF content as well as growth factors can repair muscle and cartilage. This has tremendous potential for equine athletes suffering from these types of injuries.

Performance and recovery optimization. A recent study of race horses found that those receiving added colostrum earned thousands of dollars more per race and were able to resume racing faster than those who were not supplemented. In addition, it has long been known that intense activity suppresses the immune function, both in humans as well as horses. Colostrum supplementation shows great promise in its apparent ability to stimulate neutrophil’s oxidative response following prolonged exercise. This definitely has ramifications for all horse performance disciplines.

Respiratory disease. Influenza, herpesviruses, rhinitis viruses, as well as bacterial infections are the most common causes of respiratory illness. Researchers found that a colostrum-based supplement was highly beneficial in reducing the duration of respiratory infections in Thoroughbred race horses and provided a nutraceutical alternative to drugs when treating the disease.

This article would need to be far longer to cover all of colostrum’s potential benefits. Research has been performed in a vast variety of areas. Physical endurance, wound repair, bone healing, vaccination response, skin health, neurological disorders, heart disease, and even cancer are positively impacted by this exceptional food. I encourage you to search online for colostrum research pertaining to your particular concern.

For overall maintenance of health, 10,000 mg of colostrum per day is appropriate for a full-sized horse. For injury or illness, this amount can be doubled. It is completely safe at higher dosages.

Colostrum is not just baby food. It has been used by adult humans and animals for hundreds of years with remarkable results. Its impact on the horse industry is starting to show promise, revealing itself as an amazing tool to help your horses maintain optimal health.

For the extensive list of 22 research references on which this article is based, please view it online at http://gettyequinenutrition.biz/libary/colostrumanexceptionalsuperfood.htm.

Dr. Getty’s fundamental resource book, Feed Your Horse Like a Horse, is available at www.GettyEquineNutrition.com — buy it there and have it inscribed by the author, or get it at Amazon (www.Amazon.com) or other online retail bookstores. The seven individual volumes in Dr. Getty’s topic-centered “Spotlight on Equine Nutrition” series are available with special package pricing at her website, and also at Amazon in print and Kindle versions. Dr. Getty’s books make ideal gifts for equestrians.

Find a world of useful information for the horseperson at www.GettyEquineNutrition.com: Sign up for Dr. Getty’s informative, free e-newsletter, Forage for Thought; browse her library of reference articles; search her nutrition forum; and purchase recordings of her educational teleseminars. Shop with no shipping charges for supplements, feeders, and other equine-related items at her online store. Reach Dr. Getty directly at gettyequinenutrition@gmail.com. She is available for private consultations and speaking engagements.

[i] Colostrum produced by ForeFront Equine is a superb source. It is available at Dr. Getty’s Free Shipping Supplement Store: http://horsesupplements.gettyequinenutrition.biz 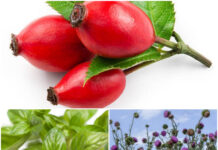 Quiet Your Horse’s Allergies through Herbs and Key Nutrients 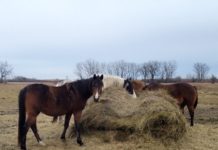 Veterinarians are considering lecithin for treating and preventing ulcers 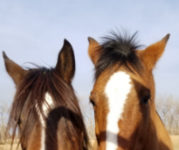 Fecal Liquid – Can It be Solved?