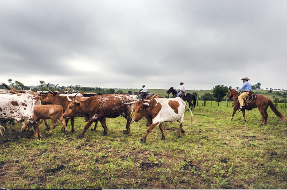 WATCHING REAL LIFE, NOT MOVIES
Dad trained, drove and rode horses, and like movie stars, rode tall in the saddle.
He told of long rides and cattle drives, with a cow pony to straddle.
One cattle drive to Manfred’s stockyards to load on the train for market.
His Dad was there to pick him up with a Model T, where he’d parked it.
His Brother had to lead Dad’s horse home. They quizzed an old horse trainer
Who told him tie that horse to his horse’s tail, it was a ‘no-brainer’.
Fearing for his horse’s tail, he hoped at the rides end…he still had one.
Using that suggestion, the ride went well and that cattle drive was done.

A 20 YEAR OLD IN 1928
One year Dad spoke to a young lad, “The first time I came to your town
Was on a long cattle drive. The sun was setting to the west at sundown.
Two of us rode in like future movie cowboys and rode in on horseback.”
That lad was shocked, “You did what?” The stunned youth couldn’t hold back.
“That was a first, I’ve never conversed with someone who came here by horse.”
Dad explained, “It was in nineteen-twenty-eight, so consider the source.
We’d fed, watered and saddled our steeds. We rose before the fast rising sun.
We were half-way through our cattle drive, knowing it had to be done.

HEAD ‘EM UP, MOVE ‘EM OUT
“We had driven cattle for miles. We’d herded them into the stockyard.
Our Brother followed with team and hayrack, so we didn’t drive them hard.
That was the first night I’d slept in a hotel room,” pointing up there.
The impatient youth stopped him, “There is NO hotel in Esmond…anywhere!”
Reclaiming the conversation, “Listen Son to what I’m about to tell;
Upstairs…in that corner building, was originally a hotel.
It was hot, I tossed and turned, awakened by the tip of the sun.
Yes, we rose, fed horses and cattle, as our cattle drive was not done.”

GET ALONG LITTLE DOGIES…TO YOUR NEW HOME
“Many miles to the north, my older Brother had bid and bought some land,
A great barn, tall windmill, fenced, plus a new shelterbelt stand.
An opportunity to raise horses, cattle, oats and plant some wheat;
He sat for hours, days and years behind a team, on a horse drawn plow seat.
Our duty…my Brother and I on horseback, drove those cattle north.
We had our trained cattle dog following them, moving back and forth.
Oh, forgot to mention, the old milk cow…she was the slowest one.
Somewhat rested, we were pleased our long cattle drive was nearly half-done.”

RATHER STRADDLE SADDLE THAN SEE MOVIES
JUBILEE RELIVED HISTORY FROM 1928
His parents arrived, he changed his tune, “Today at our Diamond Jubilee;
I learned of a cattle drive, an interesting piece of history.
I met this man who sat tall in the saddle when he rode into our town;
It was hard to believe, many years ago, on horseback, at sundown.
Cowboys arrived here like in the movies, where I’ve seen cattle drives.
We should put up a stone marker, ‘A Cattle Drover From Harvey Arrives.’”
Dad headed north, the youth convinced, grateful for such rapt attention,
Recalling details of years before, when that dusty cattle drive was done. 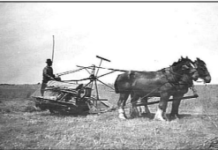 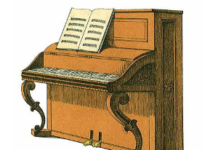 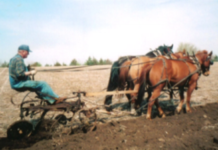 PLOWING WITH HORSES:  TOO GOOD TO BE TRUE