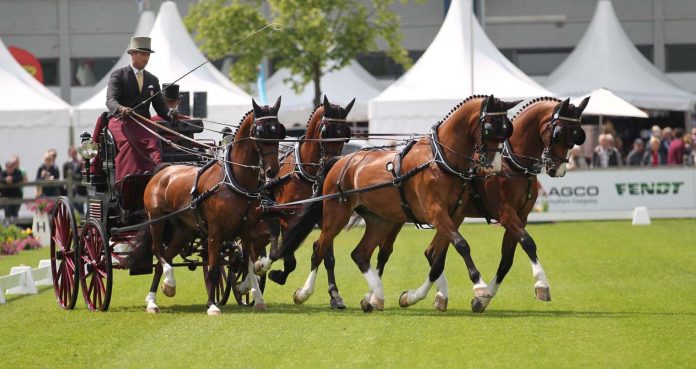 Aachen, Germany (July 19, 2016) – The greatest combined driver in American history, Chester Weber, once again masterfully held his own amongst the best drivers in the world at the CHIO Aachen World Equestrian Festival, where Weber took third place individually. Weber and Jane F. Clark’s team of KWPN geldings proved to be a formidable force, successfully driving their way through three impressive phases to the winners’ circle in the CAIO4* competition.

In 2014, the 13-time Four-in-Hand U.S. National Champion from Ocala, Florida made history as the first American to win the Four-in-Hand division at the CHIO Aachen in the competition’s nine decades of existence. Weber was proud to return to this year’s hotly contested CAIO4*, competing individually and concurrently on the U.S. Driving Team with teammate Allison Stroud in the Nations Cup competition.

Team Weber’s Splash, Uniek, Boris W, and Boy W opened with an impressive dressage phase, receiving a score of 38.34 from the ground jury for second place. Weber remained in the top five placings through an intense marathon course designed by Dr. Wolfgang Asendorf, where he arranged his team by resting Splash and enlisting newcomer Amadeus in the lineup. Artfully finishing cones with only 2.56 time penalties, Weber was the top-ranked American with a score of 160.96 for third place. He remained in good company in the final results, closely behind fellow international champions Boyd Exell of Australia and Ijsbrand Chardon of the Netherlands, respectively.

“The dressage phase demonstrated that we are in top form as the World Championships in Breda approaches,” Weber stated. “The marathon was very difficult as a stamina test. We can improve upon that in preparation for Breda.”

Team Weber also took part in the Top Score Driving Cones Competition at CHIO Aachen, where points did not count towards individual or Nations Cup placings. His team finished third. Weber will now continue training his team of horses for the World Driving Championships Four-in-Hand in Breda, the Netherlands, to be held on August 31- September 4.

Weber continues to be a leading figure in American Four-in-Hand combined driving, and promotes the equestrian sport wherever he goes. For more Team Weber updates, photos, and combined driving news, follow Chester Weber on his official Facebook page, Instagram @ChesterWeber, or visit www.ChesterWeber.com.

Photo: The greatest combined driver in American history, Chester Weber, once again masterfully held his own amongst the best drivers in the world at the CHIO Aachen World Equestrian Festival, where Weber took third place individually (Photo courtesy of Marie De Ronde-Oudemans). 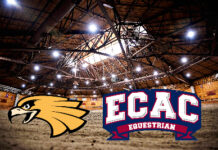