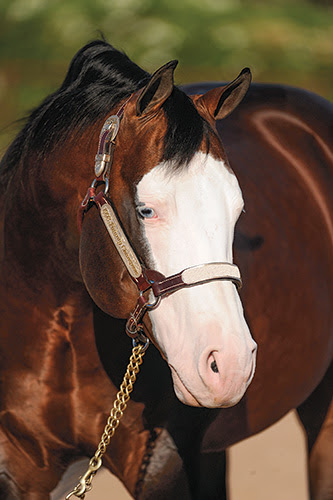 September 1, 2018 – Oklahoma City, Oklahoma – 2018 has featured several historic milestones for many horses, riders, and owners within the National Reining Horse Association (NRHA). Adding his name to the record books this year is Spooks Gotta Gun. After crossing his million dollar mark in 2015, the stallion has earned another million – making him an NRHA Two Million Dollar Sire.

Spooks Gotta Gun is by NRHA Million Dollar Sire Grays Starlight and out of Katie Gun. Bred by Eric Storey, the bay was purchased by Silver Spurs Equine in 2010. The 16-year-old stallion currently stands at Silver Spurs ranch in Scottsdale, Arizona.

Before entering the breeding shed, Spooks Gotta Gun enjoyed a successful five-year career within the show pen. His first check came in 2005 at the Texas Classic with rider Clint Haverty at the reins. In total, the stallion earned nearly $80,000 in NRHA Lifetime Earnings (LTE) with a variety of riders in the saddle. His top finishes include:

The stallion’s most notable offspring include: