“She can turn and burn with the best of them,” said Struve. “She is 14 and she has jumped a lot of jumps in her time and she’s little but I’m really happy with her today. She’ll probably retire soon.” 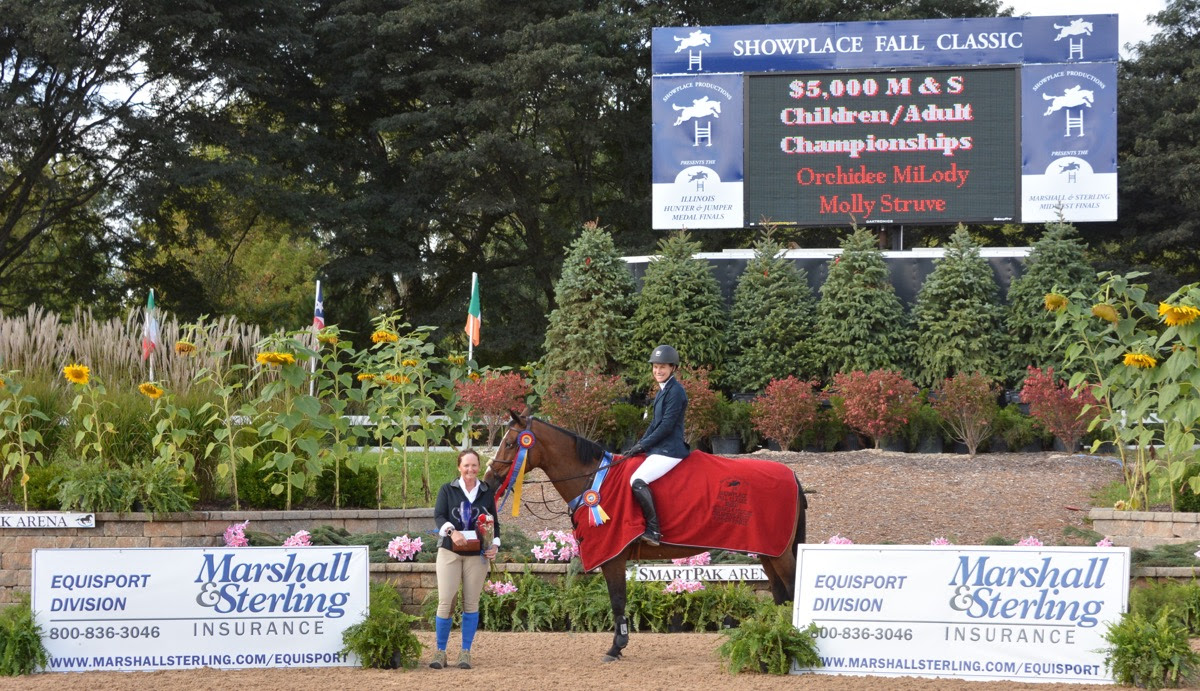 Struve rides with Scott Gentry at HBG Equine in Bristol, Wisconsin. Struve and her Orchidee Milody were the 2014 USHJA North Region Adult Jumper Champions as well as part of the Zone 5 team bronze winners. The pair has won numerous other championships and jumper classics in their career.

“I think the Marshall & Sterling series is awesome and any time you can have championships like this that brings everyone together it’s great. It’s really nice to have the competition here. To see 30 plus riders in the child adults is awesome.”

Grace Klein with Luminous finished in second, Elizabeth Lang and Sothis D Ouilly were third and Jean McLaren and Snow Day made the top four.

$5,000 N NAL/M&S Low Junior/Amateur Classic
Next up was the $5,000 NAL/M&S Low Junior/Amateur Classic. The competition drew some of the areas best young riders; many of them also participated in the M&S 1.30m Grand Prix series. Faster and faster they went until Kyle Perkovich, 15, and Roc My World couldn’t be beat. He blazed around the track leaving out strides while leaving the jumps up for the win. Giavanna Rinaldi and Dominic DV, owned by Lisa Zinck, tried to catch them but landed in second with Rodrigo’s Bianca and Adeline Rohrback in third. 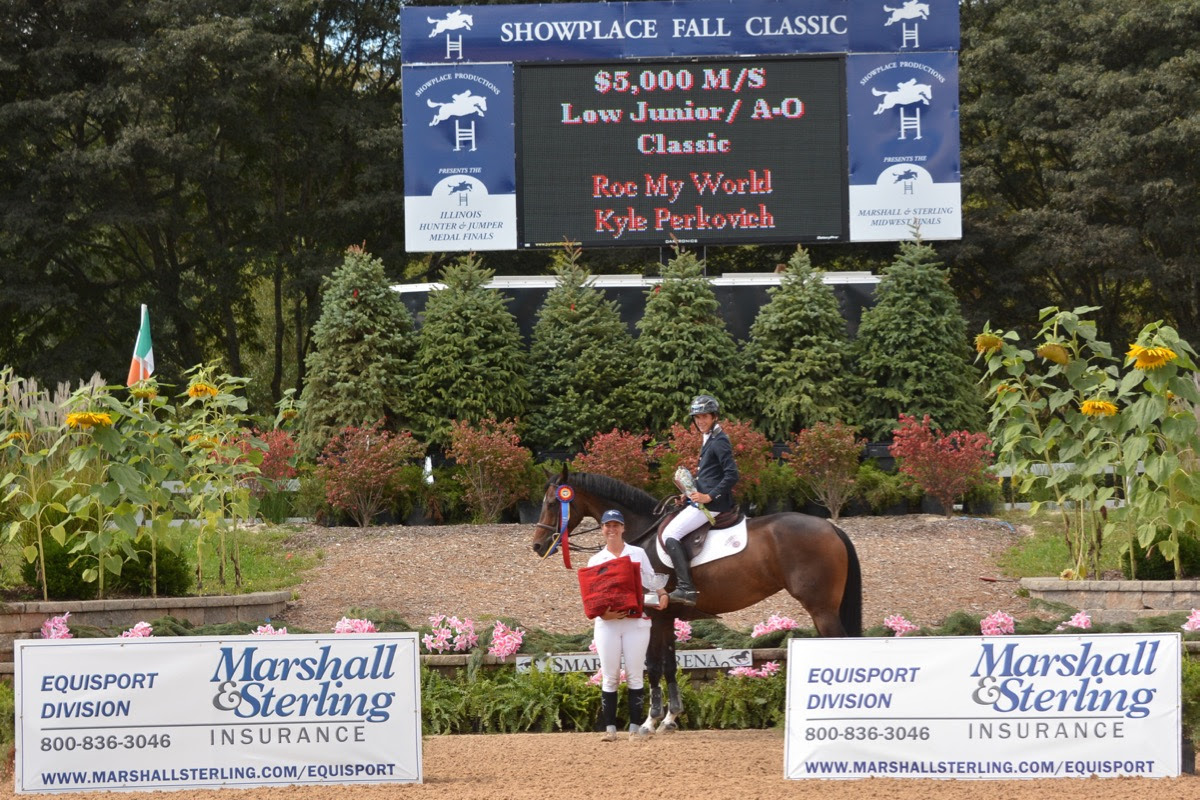 “I came out between rounds because I wanted a fresh horse for the jump off,” said Perkovich. “I had a rail earlier in the week and I really wanted to make up for that so I went for it.”

$25,000 Showplace Grand Prix
Among the many feature events of the day was the $25,000 Showplace Grand Prix. Nine riders out of a field of 22 made it around Anderson Lima’s course fault free to qualify for the jump off. Lisa Goldman and Sovereign were first to return and did not disappoint spectators, setting the pace for the rest of the field with a speedy, clear jump off in 35.731. Maggie Jayne and Amanda Dolinger’s Cupina Colada were the next to go clean but a slower time of 36.812.  Four of the nine riders had a rail come down, including Goldman’s second ride on Centurion B, where she had a faster time of 35.549 but incurred the four faults. 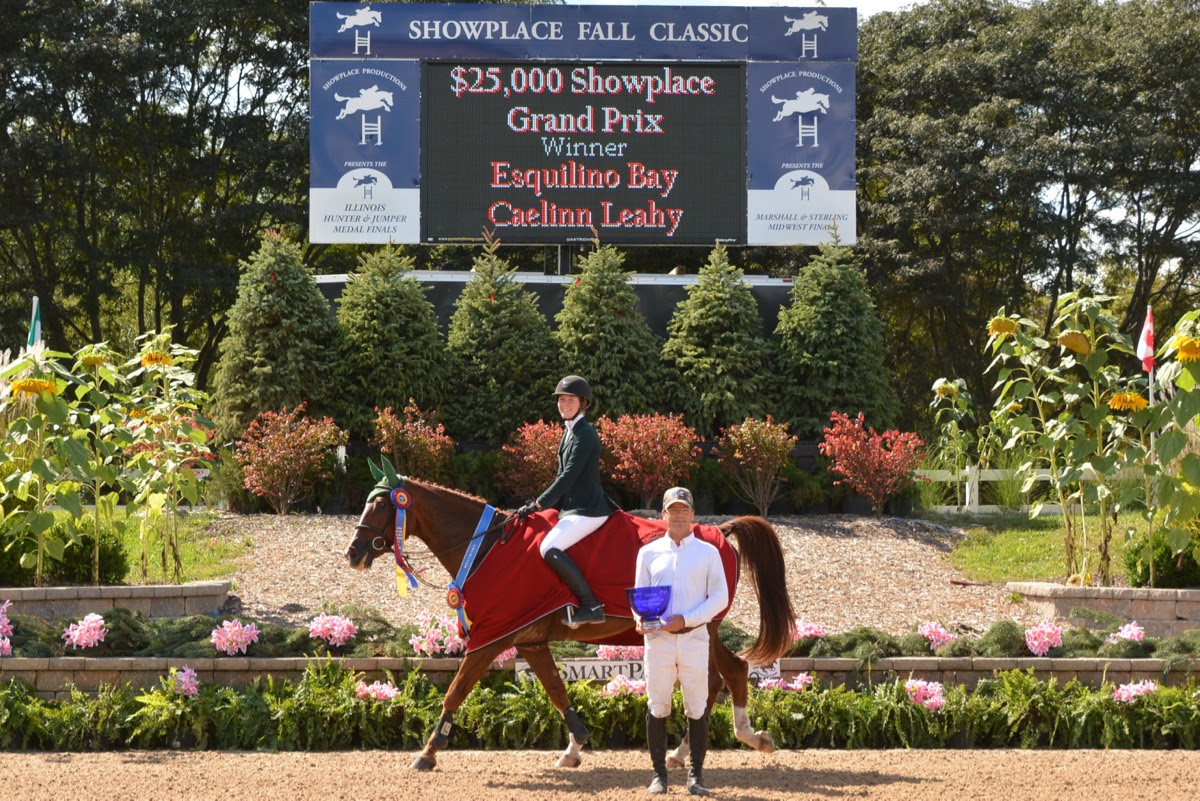 Caelinn Leahy, 15, showed them all how juniors do it, scorching the course in 34.020 on her Esquilino Bay for her first Grand Prix win, leaving Goldman and Sovereign in second and Jayne with Cupina Colada in third.

Leahy also participated in several of the M&S 1.30m Grand Prixs this season. The series was very popular for young horses and younger riders moving up the divisions. Leahy trains with Steve Schaefer at Bellis Show Jumping in Maple Park, Illinois.

“The 1.30 series has definitely influenced this win,” said Leahy. “Honestly, I think that every time I compete I’m learning more and developing as a rider.”

“Going into the jump off, I knew it was going to be very competitive, so Steve (Schaefer) and I knew I’d have to go for it,” continued Leahy. “It was such a great day! I’m so excited! I feel like Texas (Esquilino Bay) and I have come such a long way since our first Grand Prix last year. I think the best feeling was landing after the last jump and looking at the scoreboard, knowing that we did it.” 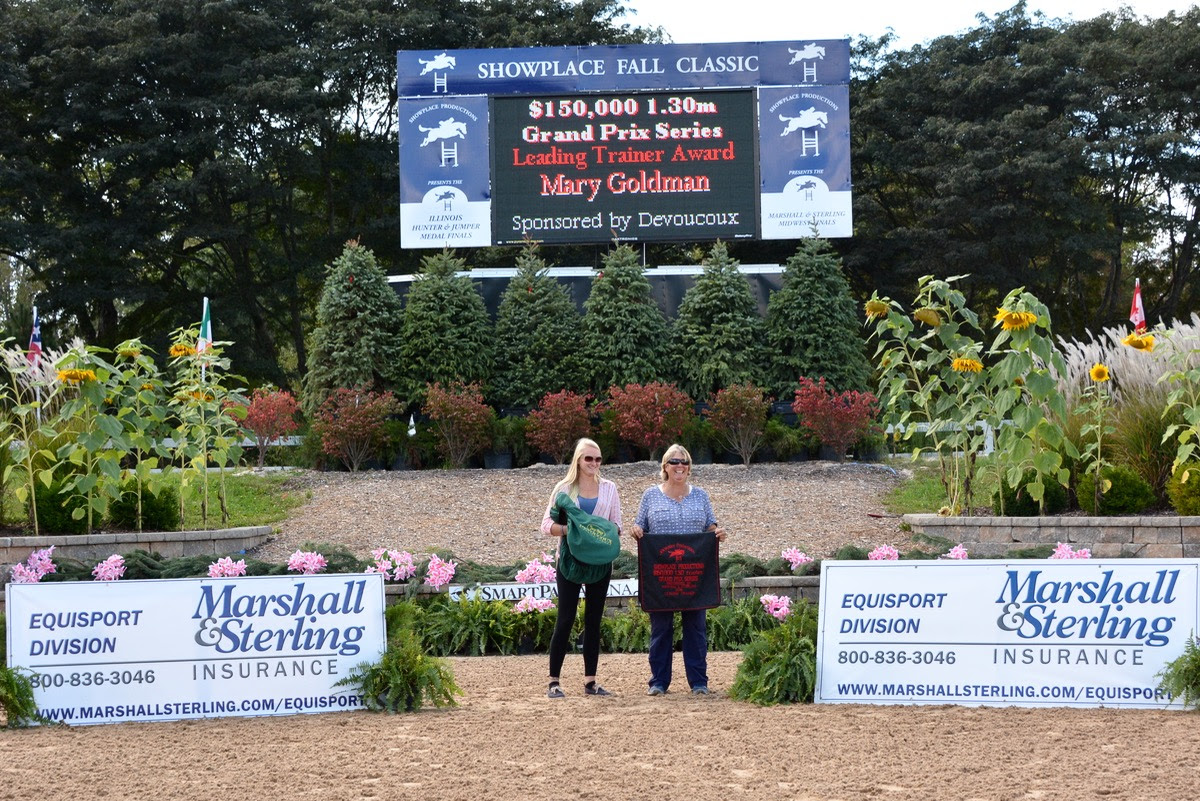 “The series was excellent,” said Mary Goldman. “It was such a great series for young riders and young horses. It really provided a perfect stepping stone to give those horses and riders mileage and experience at that height.”

“This 1.30m series gave both my horse and me more confidence,” said Perkovich. “The competition is great and the courses were great. I would definitely recommend the series to others. It makes a difference in your riding skills because of the height of the jumps, the complex course designs and the overall competition.” 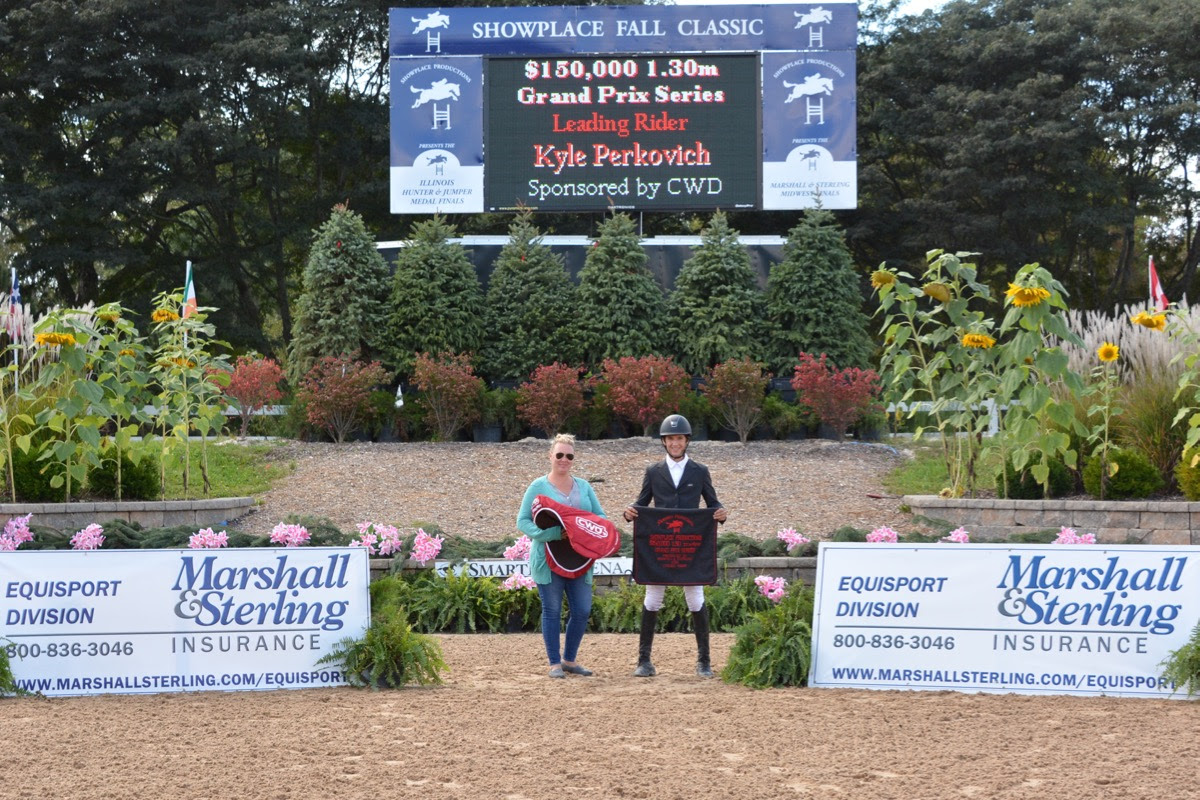 “I want to thank Mary and Lisa Goldman for helping me get where I am today, along with my parents. I also want to thank Nancy Whitehead for breeding Roc My World. Without her (Roc My World) I wouldn’t be here today. I love everything about that horse!” 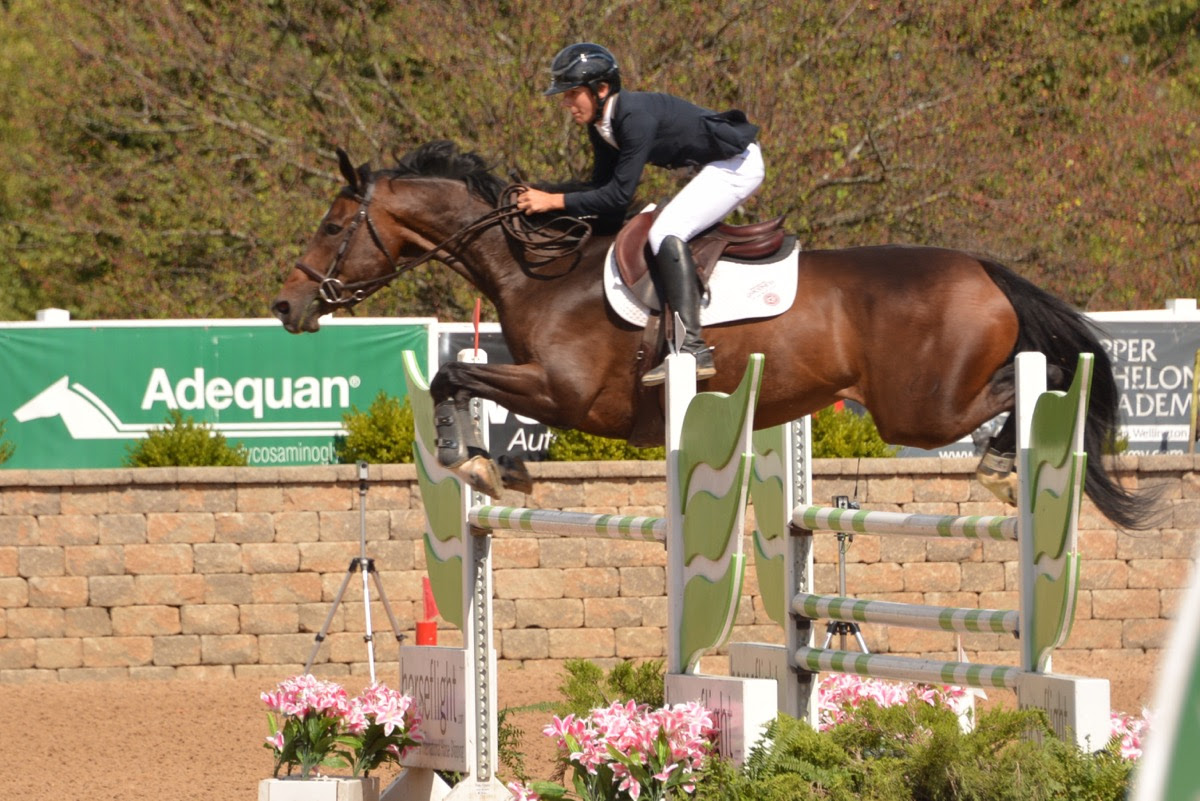 Perkovich will head to Kentucky with the Goldman’s and Red Coat Farm next wee for more jumper competition.

M&S Medal Finals
The busy day continued with a quick course change and on to the M&S Medal Finals. Riders showed their skills over a course with bending lines, combinations, rollbacks and straight lines to earn their first round score. The top four riders were invited back into the ring for additional testing.

“I wasn’t too nervous. I know my horse so well, he’s so perfect,” said Wegbreit of her horse, Tachman. “I’ve had for about three and a half years so I really know him.”

Wegbreit and Concklin will show in the IHJA Adult Medal Finals on Sunday. Unlike Wegbreit, Concklin doesn’t know her horse as well; she is borrowing the sale horse from Schone so she could ride in the finals. Wegbreit also won the IHJA Adult Medal in 2015 so she’ll head into the second day with some experience under her belt but Concklin is a real competitor so it will be a class to watch.

“I’m just going to try to be smooth and even tomorrow,” added Wegbreit.

Adeline Cordin-Blitstein and Vince was third and Emily Yslas with McLovin made the final four.

Sore No More Children’s Medal Finals
In the Sore No More Children’s Medal Finals, Britta Stoeckel was on top with a score of 78, followed by Delaney Hoffman with 72, Molly Canfield with 70 and Jaimee Delorge with a 66. The top four came back for some flat work as their test. After the line up it was Delaney Hoffman and Bravo taking the Championship with Molly Canfield and Penny Lane as the Reserve Champion. Stoeckel ended up in third with Delorge in fourth. 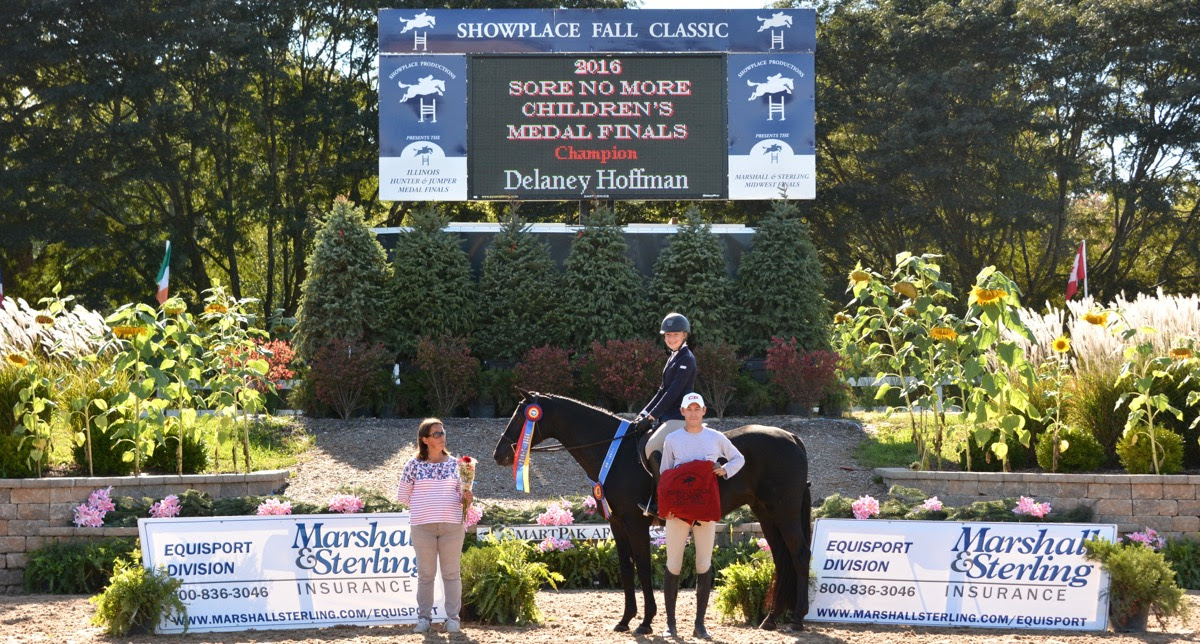 “He’s perfect,” said Hoffman. “I couldn’t have asked for anything better. I was excited it wasn’t a jumping test so there was less of a chance to mess up but I was a little nervous to flat because he’s not really an equitation horse, he’s really a hunter but he was amazing.” 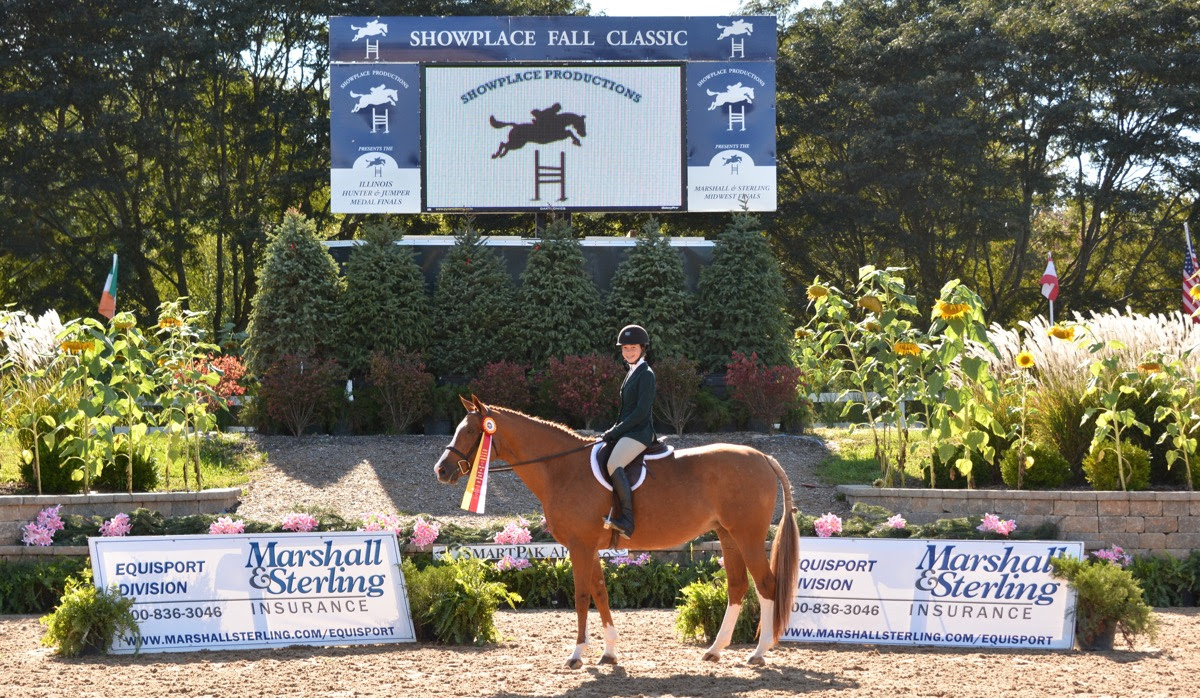 “I was hoping it would be a jumping test because in my opinion the jumps are more fun but I was happy to flat because Penny is so simple,” said Canfield.

Both Canfield and Hoffman will show in the IHJA Medal Finals as well.

“I thought today was a really good warm up and Penny was really good so I’m excited for tomorrow,” added Canfield.

“I also thought it was a great warm up for tomorrow because yesterday I was far from perfect,” laughed Hoffman.

M&S Junior Medal Finals
In the M&S Junior Medal Finals, Paige Matthies was the leader from beginning to end with a first round score of 85. Gia Gulino scored an 82, Ashley Flanagan received a 78.5 and Louisa Brackett earned a 78 to be in the top four.  The junior riders had the most difficult test of the day which included cantering an oxer straight from the line up, a trot jump, a halt and a counter canter through a turn to the last jump. The four junior riders stepped up to the plate, displaying some well thought out executions. Matthies ended up on top for the Championship with the other riders also holding their first round spots with Gulino as Reserve Champion, Flanagan third and Brackett in fourth. 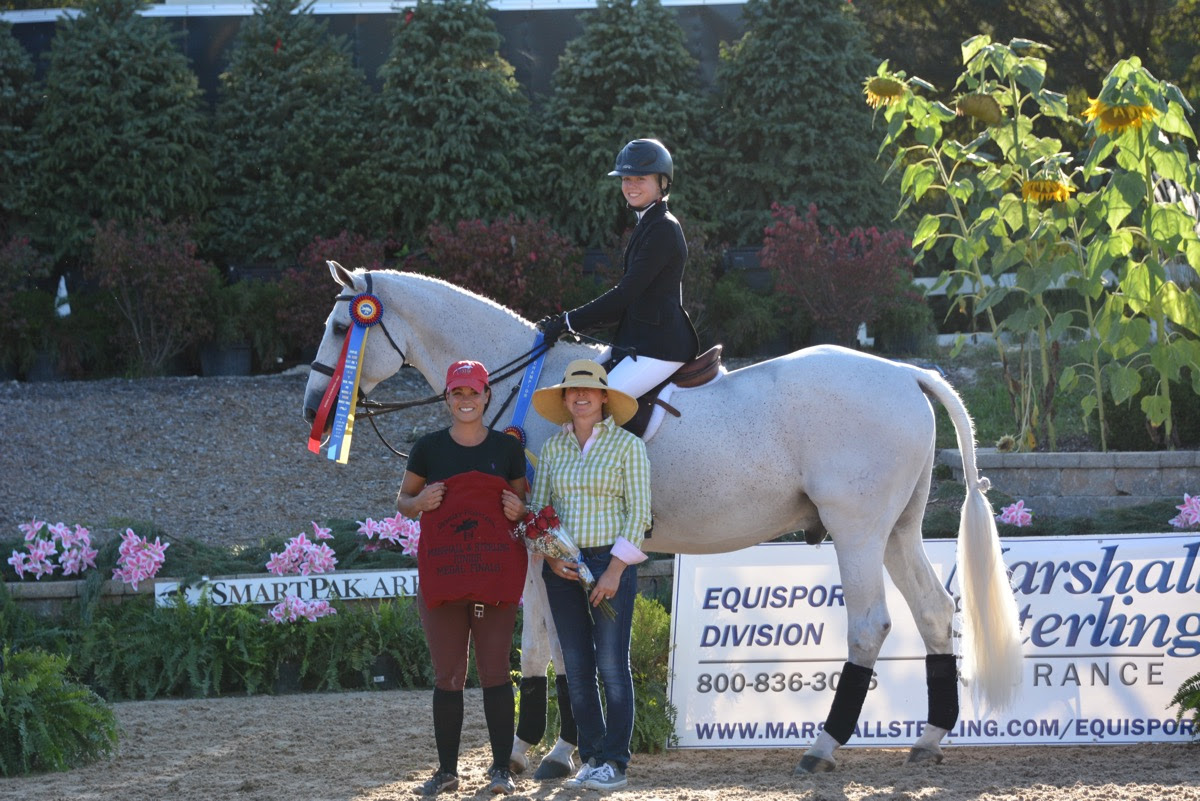 Matthies rides with Melissa Hirt at Northern Pines Farm in Michigan. She will ride in the IHJA Medal finals then head to Kentucky for the ASPCA Maclay Regionals.

“The courses were amazing, the jumps were beautiful once again,” commented Matthies. “The whole environment is very helpful for preparing for regionals, especially having more complicated tests.” 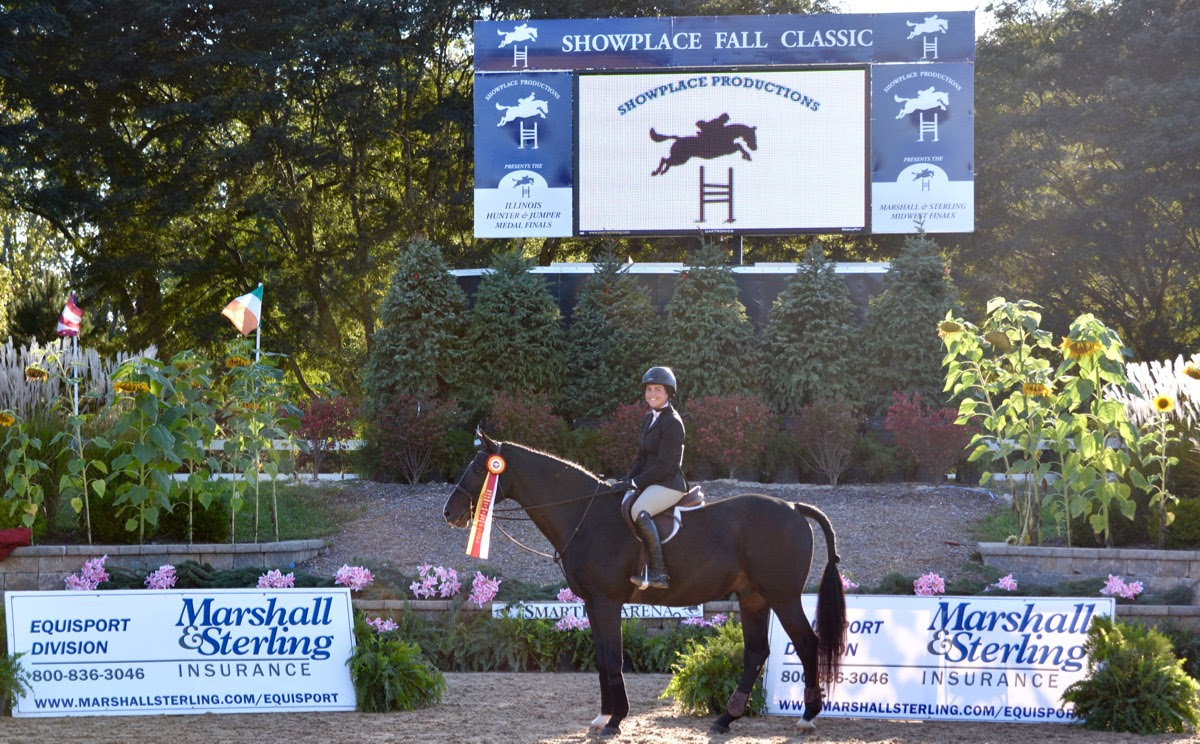 Gulino was the 2015 winner of the M&S Junior Medal. She qualified for the ASPCA Maclay finals last year and will head to Kentucky next week to qualify again. Gulino rides with Tina Judge-Boyle at Judgement Farm and also spends time with top equitation trainer Don Stewart of Ocala, Florida.

“Pat (Boyle) and Skip (Bailey) always have great courses for finals. There were so many lines for going forward and coming back or bending lines to stay out a stride or two, it was all very helpful and you can’t get this anywhere else,” said Gulino.

Liberty Z is a new ride for Gulino so she plans on using tomorrow as another time to get to know him better before the regional competition. He’s a very different type of horse from her last equitation horse so she is just getting the feel for him.

“I’m really lucky to have any horse to go to regionals with right now,” said Gulino with a smile of gratitude. 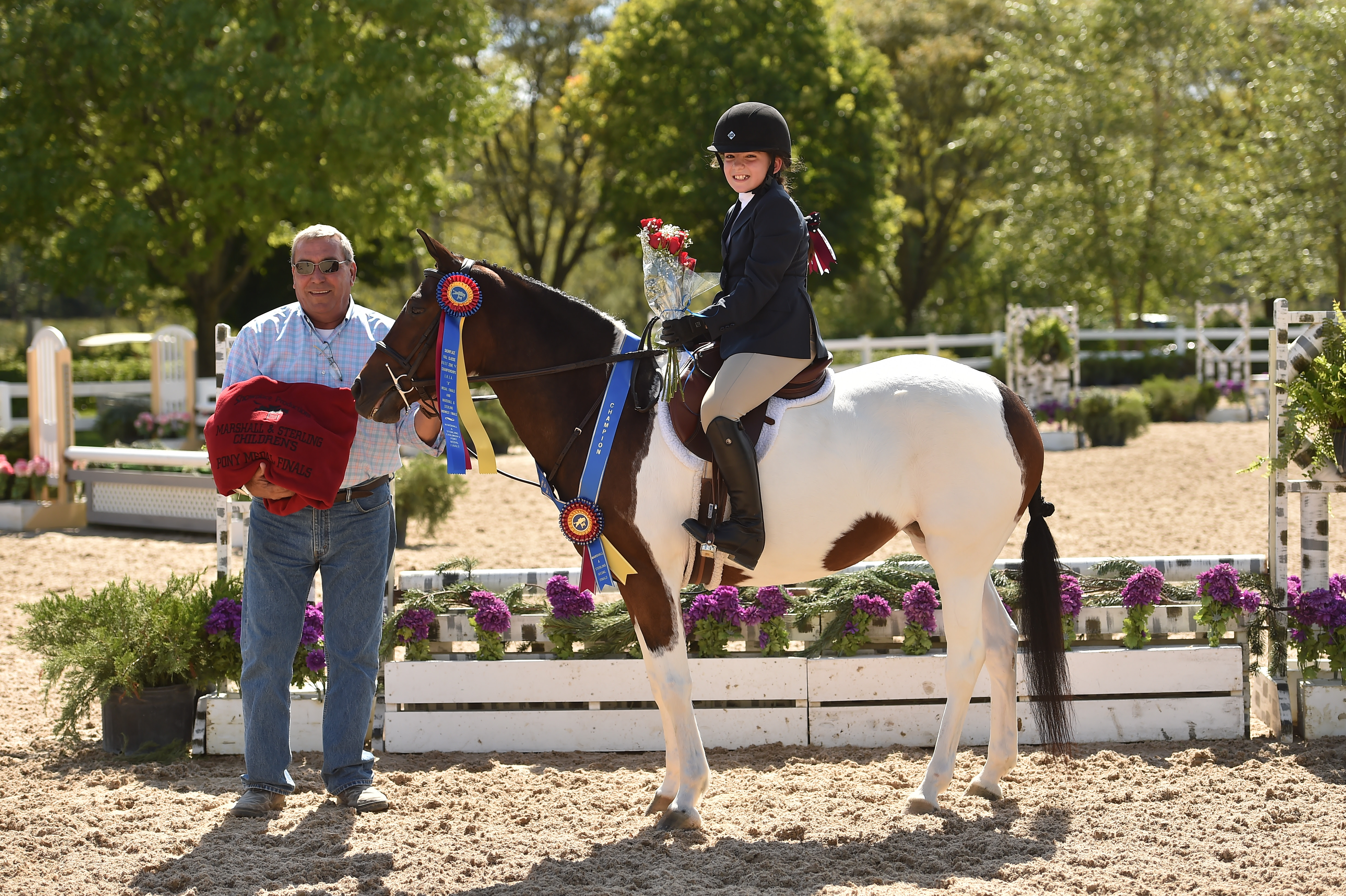 Medal competition continues on Sunday with the highly anticipated IHJA “A” Medal Finals and the M&S Children’s and Adult Hunter Championships. The day will be another Showplace celebration with great hospitality and challenging competition.